Vicky Jackson is an adventurous woman with a capital ‘A’ who is giving back to the Nelson community.

Vicky and her husband, Tom, set sail from the UK on what turned out to be a world cruise in 1997. They were seasoned sailors with ocean racing experience who had lived on their yacht, Sunstone since 1981, while working fulltime in education. Their yacht-home is a 12m, wooden sloop, built in 1965, designed by Sparkman and Stephens.

They loved the total freedom of ocean sailing in midlife, starting with a list of places they wanted to visit. At first, they had no plans to circumnavigate the world. That came later.

Their first big adjustment was being together on their own at sea for long periods of time. They learned to deal with issues that came up, personal and technical; their seafaring challenges brought them closer together.

Vicky found ways to call on extra energy and stamina and to work smarter in extreme conditions. An example was completing the tough task of reducing sail on her own in Alaska’s Aleutian Islands, where it was so cold she became slightly hypothermic.

During their ocean adventures they discovered people in less developed and poorer societies were the most generous, especially in Vanuatu. Vicky describes the Ni-Vanuatu as an interested and thoughtful people with a happy demeanour, generous with time and giving whatever they can.

Some of their best times were sailing on the vast Pacific Ocean under a full moon surrounded by sparkling waves and gazing at wondrous phosphorescence trails in the wake of their yacht. More memorable experiences included watching whales breaching and majestic albatrosses soaring near Stewart Island, as well as being up close to Alaskan brown bears.

After 15 years at sea, including a global circumnavigation, Vicky and Tom chose to settle in Nelson.

They love the blue calm winter days and being slightly off the beaten track. Nelson is a really good refit port for fishing boats which helps for work on their yacht. Another attraction is tramping in nearby national parks.

After living so long in the confines of a yacht, Vicky says it was a weird transition moving into a spacious home. Newfound luxuries were having a washing machine nearby to wash at any time and a shower that did not need coins to operate and did not run out of water.

They miss the simplicity of the sailing lifestyle which balances a slow serene pace with full on spells in challenging conditions.

Vicky likes stepping out of her comfort zone, being adventurous and pushing herself to extremes. She makes friends easily, a skill that came in handy for making quick connections to get things done in unfamiliar destinations. She utilised those social skills to make new friends after settling in Nelson.

Vicky launched Age to Age three years after arriving in Nelson. She says ‘volunteering is a great way to find purpose in later life’.

Age to Age is based on a simple concept which encourages young and old to come together and learn from one another. She started small with one primary school partnering with a retirement village. Since then it has grown to five schools and five retirement villages. Young students and older residents have an immediate connection which benefits both age groups.

'There is so much to learn and share between older and younger generations, all with joyful, smiling faces.'

Vicky continues to be active in her 60s. She goes to the gym regularly, practices Iyengar Yoga for posture and balance and cycles 4 to 5 days a week, as well as sailing and tramping.

She is someone who has made successful transitions and has these tips to share:

“You can create your own life. You don’t have to follow what others expect of you.” 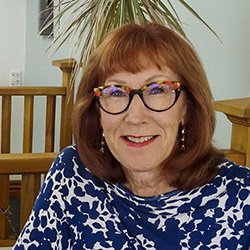